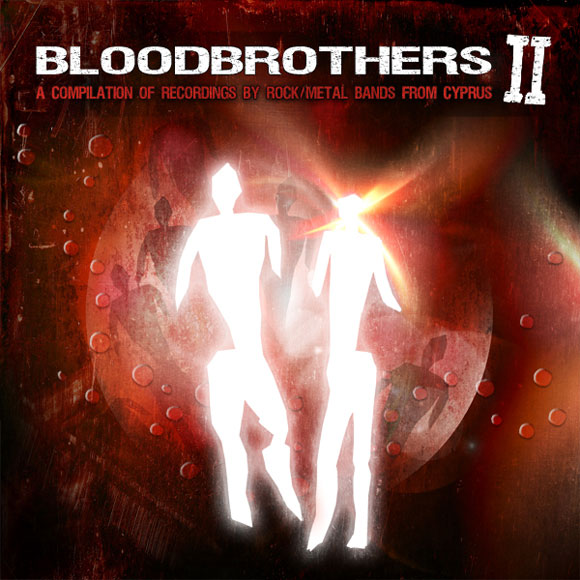 PITCH BLACK RECORDS is extremely proud to announce the release of a compilation album featuring bands from Cyprus. The compilation is titled “Bloodbrothers II – A Compilation of Recordings by Rock/Metal Bands From Cyprus”, celebrating the legacy of the original “Bloodbrothers” compilation, released in 1997 and now considered a hard-to-find, cult classic.

Ranging from power, traditional, thrash and death metal to alternative, progressive and punk rock, “Bloodbrothers II” aims to showcase some of the most talented bands Cyprus currently has to offer. With 18 bands featured and a playing time of one hour and nineteen minutes this is as “full” a CD as it can get! If only it was possible to fit more music on one CD as we feel there are still a lot more quality bands in Cyprus.

The title of the compilation refers to the strong ties between members of the Cyprus scene. It may be a small scene but it is (and has always been) one that is very strong, proud and united, full of passion and support for one another. Turning the phrase “blood brothers” into one word is a deliberate attempt to further emphasize this strong bond that exists between the members of the Cyprus scene.

Including new and unreleased material from internationally renowned bands (such as “Fallen Angels and Lost Souls” of scene veterans ARMAGEDDON and ARRAYAN PATH’s “The Bible Bleeds”), cherished classics from the Cyprus underground and the first exciting blasts from a fresh, new generation, “Bloodbrothers II” runs the gamut from mega-studio-awesomeness to raw garage demo; but the musicianship and passion are evident throughout this compilation!

“Bloodbrothers II” will only be available on CD, at a special discounted price. It will be released in Cyprus first, on May 28th and worldwide on June 10th. The first 100 ordered from the Pitch Black Records online store will also include the original “Bloodbrothers” compilation as a bonus disc!

To tie the whole project together, the album includes a forward by Mr. Robert Camassa, the man who conceptualized and oversaw the production of the original “Bloodbrothers” compilation. A respected radio producer and fanatic music collector, Robert’s tireless support of the Cyprus scene has helped many of the bands on this disc make their first steps and has made him the unsurpassed authority on the Cyprus music scene.

Lastly, a free mobile app and mobile site will complement the compilation with news updates and information on the Cyprus scene, band links, venue and bar locations and other.