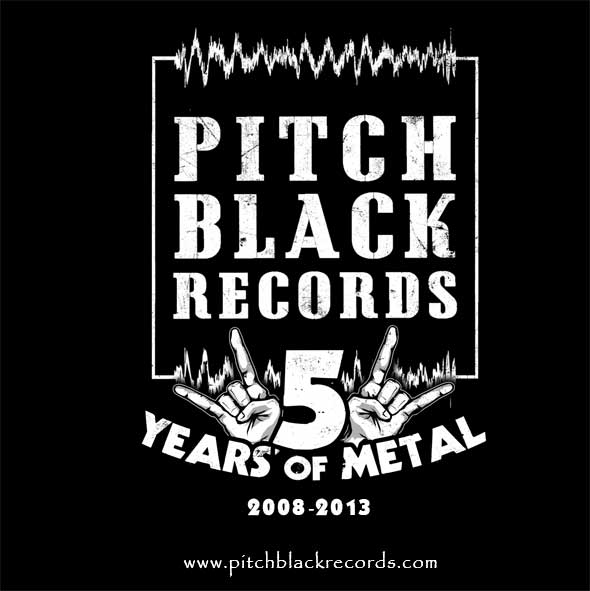 When we were putting together our first release back in 2008 we knew that we were going to continue doing this for a long time afterwards. This was obvious from the sheer passion and dedication we found ourselves putting into that first release and this hasn’t changed one bit for any of our releases that followed later on.

Five years might not sound much (or even 20 releases for that matter) but hey, we never bragged about being the biggest label ever! Besides, we pride ourselves in that what we lack in quantity we most certainly make up in quality! Each and every one of our releases has received a fair share of enthusiastic reviews, many of those releases have been included in “best of the year” lists by various writers and reviewers while others have received significant distinctions. Of course we’re not forgetting the fans and how they have all embraced Pitch Black Records and our releases so a HUGE thanks to you as well for being part of this.

During the last five years we have established some good solid relationships and friendships, both with business partners as well as with the artists we have had the honor of working with and releasing their work. Even more exciting things are happening this year, some of which include an important new distribution deal for North America (details to be announced soon), some great  new releases (including new albums by ILLNATH and ARRAYAN PATH) our new and revamped online store already in operation and our just-released free mobile app (currently available for Android, coming soon for iPad and iPhone). We are also working on a compilation album that will be very special in lots of ways.

As part of our 5-year celebrations we are offering a free 20-track sampler containing a song from each of our releases since 2008 (totaling in over one hour of music). We are offering this as a free download BUT… we are also offering the same compilation (again, for free) on CD! More details on how to acquire either version (or both) are available on our official Facebook page (www.facebook.com/pitchblackrecords).

We may be small but we definitely have a big heart when it comes to metal and fellow metal fans and we hope this is evident throughout everything we do. We’re driven by the same passion and dedication as we were on day one and we don’t foresee this changing any time soon, so stick around, we’re still just getting started… \m/