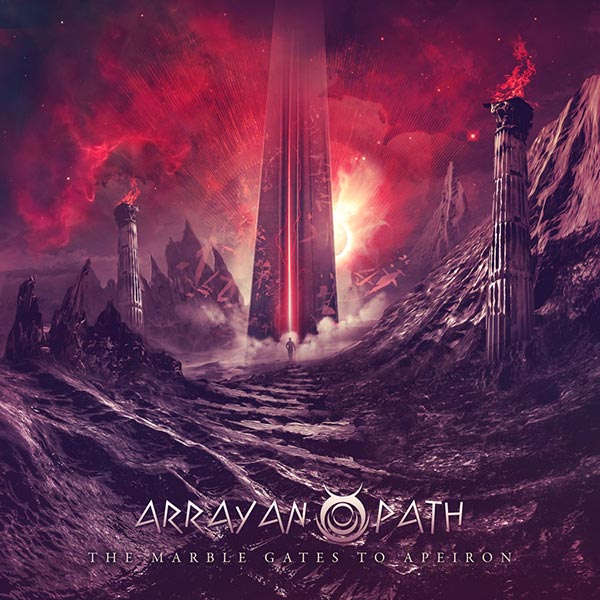 The Epic Power Metal force that is ARRAYAN PATH returns with the band’s 8th full-length, a follow-up to 2018’s double-disc album “Archegonoi”.

Titled “The Marble Gates to Apeiron”, the new album is due to be released on November 27th on CD and Digital.

The new ARRAYAN PATH album is much heavier than its predecessor and more on the “up-tempo” scale, while at the same time maintaining all the characteristics and trademarks that make up the unmistakable style and sound of ARRAYAN PATH.

Nicholas Leptos, the band’s driving force (also current vocalist of legendary WARLORD) comments: “We worried less about doing something ‘out of the ordinary’ and more about writing good melodic metal songs. There was also more collaboration between the band members, maybe more than ever before!”

Lyric-wise, even though the new album is not a concept album, it does have a common theme running among the songs, one that deals with human nature as it has developed through the ages. For this reason the album is “divided” into 3 parts, with each part made up of 3 songs: The Past, The Present and The Future.

Even though the subject matter might seem varied between songs, as already mentioned there is a central theme that revolves around human reaction and response; from the destruction of our planet, to people’s quarrels regarding the pandemic, life, death, religion and mourning; and of course, somewhere in all that, the band’s favorite subject since forever: mythology!

The album was produced by Slava Selin and ARRAYAN PATH and mixed by Simone Mularoni who has given a breath of fresh air to the band’s music over the past few years. Artwork was done by Giannis Nakos at Remedy Art Designs.

The first single off the album (“A Silent Masquerade”) is available for streaming and free download together with its lyric video:

Album tracklisting:
1. The Marble Gates to Apeiron
2. Metamorphosis
3. Virus
4. The Mourning Ghost
5. To Live Another Day
6. The Mask of Sanity
7. The Cardinal Order
8. A Silent Masquerade
9. Black Sails (The Nemean Ode)

Drums on the album performed by Danny Conway.