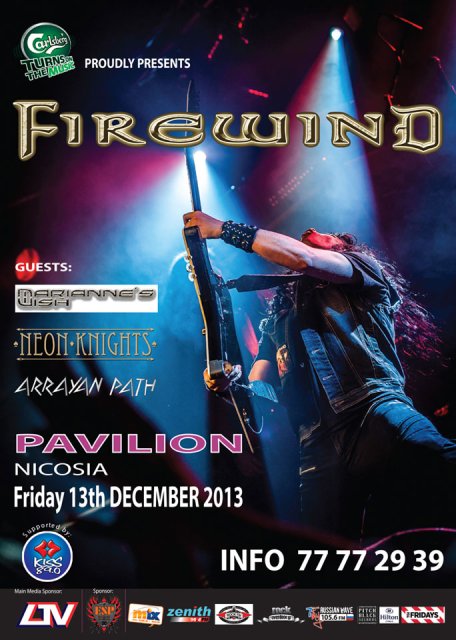 One more excellent metal concert taking place in Cyprus and of course we are extremely proud to be supporting this one as well! Our very own Arrayan Path will also have the main support slot! This will be the band’s first live appearance since their album was released last summer.

Here is the official announcement from the organizer:

Carlsberg Turns On The Music presents the long awaited performance by Ozzy Osbourne’s axeman Gus G and his Firewind band as they soon touch down in Cyprus for the very first time. Set to play on Friday 13th December at Pavilion club in Nicosia, they will be rocking the boat as part of their world tour promoting their latest album “Apotheosis – Live”.

Known by many as Ozzy Osbourne’s fiery guitarist, widely recognised for his wild stints in Dream Evil and Nightrage, while also famed as a touring player with Arch Enemy, Gus G and his Firewind crew have always known exactly how to give crowds a great reason to party.

Keeping the melodic flame alive whatever stage they are on, audiences are wowed with an impressive medley of memorable and catchy tunes topped off by bending fretwork and solos that command instantaneous air guitar and dropping jaws from all who witness the wonderful madness.

Jamming for over ten years, Gus G’s Firewind have seven studio albums under their belt; from “Few Against Many” (Century Media / EMI) and the “Live Premonition” DVD, to their newest live album release named “Apotheosis – Live 2012”. As Gus G and his band prepare to work their magic on our shores, one thing is for sure- there will be no shortage of mind-blowing melodic power metal on offer for all in attendance!

Renowned as a high octane live act who have jetted across Europe, the United States, and just about everywhere in between, Cypriot fans have patiently waited for their turn to finally enjoy the mighty Gus G’s Firewind live in action. With the wait now over, the energetic group are finally about to give it their all, ready to deliver their explosive and spectacular stylings to their proud and dedicated fans who have good reason to truly let their hair down for a night like no other!

Guests on the night:
MARIANNE’S WISH (Minus One)
NEON KNIGHTS
ARRAYAN PATH

All tickets will be entered in a draw for a chance to win an ESP guitar signed by Gus G!