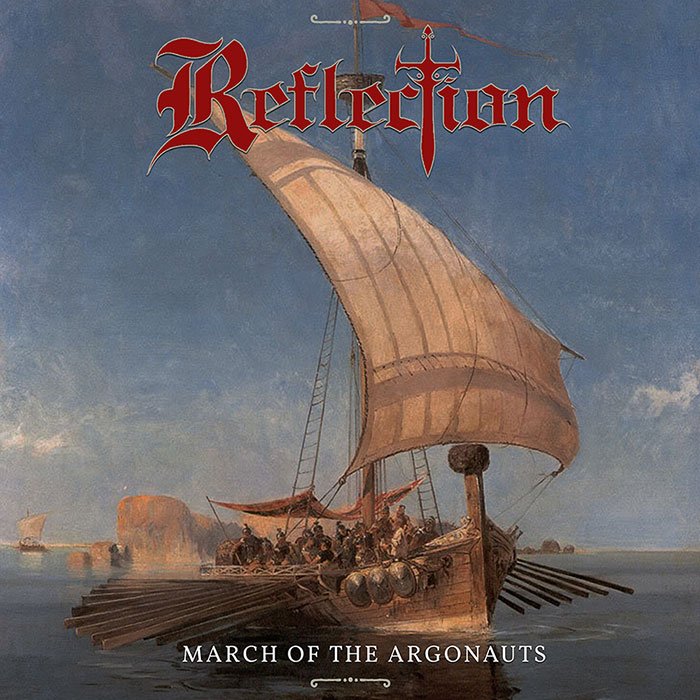 “March of the Argonauts” sets the standard for the band’s upcoming new album (to be released later this year) that re-enacts the massive epic metal feeling that has always been characteristic of the band’s sound and more specifically in this case, 2003’s “Odyssey” album. The roaring vocals, the melodic guitars, the sophisticated bass and the galloping drums, all pour together into a sonic vessel of force to be reckoned with.

The song’s lyrics pay tribute to one of the most famous adventures of Greek mythology, the quest of Jason and the Argonauts for the Golden Fleece. Stathis Pavlantis, founder and guitarist of REFLECTION comments: “The naval exploration of the world beyond the Ancient Greek domain, against all odds and challenges, is linked with our intention to continue to explore the realms of epic heavy metal, against the entropy of time. Our passion for metal never dies!”

“March of the Argonauts” was recorded at Dark Water Audio, Athens, Greece in a very natural setting and it’s worth mentioning that during the recordings, no drum triggers or samples were used, no guitar re-amping or voice autotune and copy/paste. As a band destined to play on stage, REFLECTION wanted to be true to their fellowship and perform as authentic as possible.

The new REFLECTION track has just been exclusively premiered at the popular NWOTHM Full Metal Albums YouTube channel and is already available for streaming or purchase on Bandcamp. It will soon also become available on all digital stores worldwide.

February 2, 2022 in News
Join our Mailing List
MUSIC
Random video
Manage Cookie Consent
To provide the best experiences, we use technologies like cookies to store and/or access device information. Consenting to these technologies will allow us to process data such as browsing behavior or unique IDs on this site. Not consenting or withdrawing consent, may adversely affect certain features and functions.
Manage options Manage services Manage vendors Read more about these purposes
View preferences
{title} {title} {title}