Greek Metal Attack, in May! 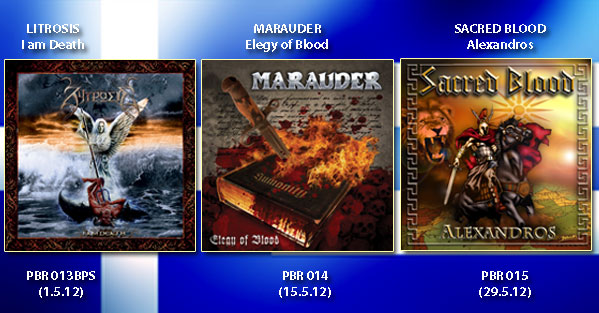 We are pleased to announce the addition of three outstanding Greek metal acts into our roster and the release of their albums in May. Each band is unique in its own way and style and their albums will be impossible to go unnoticed.

LITROSIS “I am Death” (symphonic black metal)
PBR 013BPS (May 1st, 2012)
Their debut album will be the second release in the ‘Blackest Pitch Series’, a series which always features an eclectic selection of black metal with the first pressing being a unique and collectible packaging limited to 333 numbered copies.
http://www.facebook.com/Litrosis

MARAUDER “Elegy of Blood” (classic heavy metal)
PBR 014 (May 15th, 2012)
Greek metal legends are back with their fifth offering! Superb compositions, a powerful production and an already proven performance make waiting for this album unbearable!
http://www.marauder.gr

SACRED BLOOD “Alexandros” (epic power metal)
PBR 015 (May 29th, 2012)
Sophomore release for this band that goes beyond epic, fusing metal with folk instruments. A concept album adequately dealing with a mighty certain someone who needs no further introduction… Alexandros, better known as Alexander the Great.
http://www.sacred-blood.com

More details about each band and album will be revealed soon.