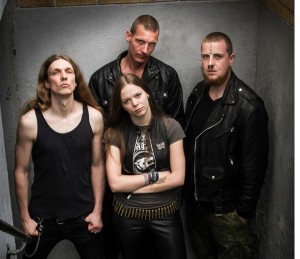 Illnath have made the following announcement concerning the band’s new vocalist:

We are very proud to announce, that Marika Hyldmar is now a part of the Illnath family. After several auditions with several vocalists, we decided that Marika was exactly what this band needed. And thus, we dragged out of the comfort of her home, and cast her into the fields of evil pleasure.

Marika is 21 years old, born and raised in Silkeborg, Jutland. Marika was introduced to the metal scene – and Illnath – in her early years, and she decided that she wanted to be a vocalist herself. In 2012 she formed her own band, Machiavellian, and will continue this project alongside Illnath. In her sparetime she is a photographer for rockfreaks.net. Her main inspiration lies in the black and thrash-metal scene. Bands like Absu and Skelletonwitch are a big influence on Marika’s vocal.

We have decided that Marika was to re-record Ravenous Crows (now just Crows), because this would show the full potential of her voice. You can listen to the result below this post.

We are extremely proud to welcome Marika to the band, and we look forward to many rehearsals, records and of course concerts. We have already started writing songs for an EP, which will be available in the end of 2013. So stay tuned!