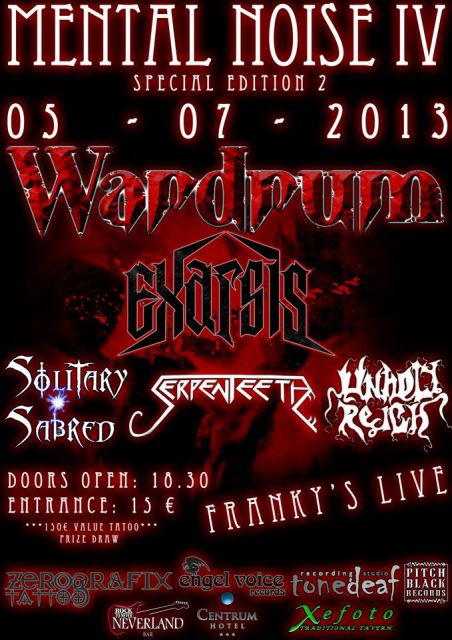 We are happy to be supporting this festival. Here’s the official announcement by the organisers:

Serpent Teeth are back with their annual fest!
This time ON STAGE:

Wardrum (GR) : -Greek Heavy/ Power Metal
-Formed in 2010 in Thessaloniki
-First album, “Spadework”, released by Steel Gallery Records in 2011 with influences from Judas Priest, Dio, Warlord etc
-In 2012, “Desolation” is released and were nominated as No. 4 best greek metal band of the year by Metal Hammer

Exarsis (GR) : -Formed in 2009
-Old school thrash metal
-Started getting well known after the release of their homemade album “Under Destruction” in 2011 and after supporting Sodom (Ger) in Athens
-In 2012 they released of their debut album “The Brutal State” and opened for Onslaught(GB) in Athens
-2013 already signed with MDD Records and booked to be a support band for Anthrax in July in Athens

Solitary Sabred (CY) : -One of the very best cypriot metal bands around
– old school Epic/ Progressive/ Power Metal
-Formed in 2000 with a break for studies between 2004-2007
-With their comeback they performed at Power of the Night 3 and released their first Promo DVD
-In 2008 they released their album “The Hero, the Monster & the Myth” which had great success
-Late 2011 with new and energetic bassist they released “Redemption Through Force” a very promising album.
-So far they performed alongside Cloven Hoof, Grim Reaper, Enforcer and Dark Quarterer.

Serpent Teeth (CY) : -Formed in 2009
-Heavy/ Power Metal
-Organisers of Mental Noise Festivals
-Influences from Iced Earth, Dio, Dokken, Saxon etc
-In 2012 they put together a DIY demo “Serpent Teeth” which put them on the heavy metal map of Cyprus
-They supported Holocaust, Enforcer, Marauder, Arryan Path, Crimson Fire etc
-Due to their service of their country, Mental Noise Special Edition 2013 will be the first gig they join since July 2012

Unholy Reigh (CY) : -5 teen group formed in 2012
-Playing covers for bands such as Manowar, Jack Starr’s Burning Star, Helloween and many more and are working on their own songs as well
-After the first 2 gigs they supported they started to be recognised here in Cyprus as well as abroad
-After uploading a video of a cover they performed by Jack Starr’s Burning Star, Jack himself contacted them to congratulate them and offered them to cooperate with him