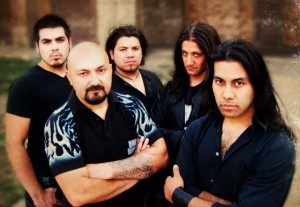 PITCH BLACK RECORDS welcomes ALEXIS into its roster of artists and is pleased to
announce their upcoming album, “Birds of Prey”, due for release on November 19th.

One of the founding members of Inquisicion and later on Witchblade, charismatic singer and
songwriter Freddy Alexis has been enjoying a large following in his home country of Chile.

With a large number of releases in his background and the thrill of opening shows for such
acts as Gamma Ray, Kreator and twice for Iron Maiden, Freddy Alexis is now returning with
his new solo project, ALEXIS.

Joined by his old song-writing friend Gabriel Hidalgo, the duo have created an album that
marks a new metal beginning for Freddy Alexis and his band mates; an album full of solid,
melodic power metal and passionate performances.

The CD version includes an additional three bonus tracks of older compositions remixed and
remastered and will be available worldwide through Pitch Black Records and Twilight-
Distribution. It will also be available for digital download through several major mp3 stores.