We were informed with immense sadness and sorrow of the passing of Scott Columbus on Monday 4/4/2011. While we’re still at a loss for words, we can’t just let this pass unmentioned. We also wanted to share with everyone Scott’s voice and pleasant character as recorded during a live radio interview that he gave on Cyprus radio last year.

We had the pleasure and honor of meeting Scott along with Ross the Boss and his band last summer when they visited Cyprus to headline Power of the Night V Festival.

Scott’s drumming abilities are unmatched and undisputed, period. So is his contribution to music of course, including some of the best and truly classic metal albums ever. Scott’s pleasant personality and energy were also unmatched and they were evident from day one when we met him. He was a fantastic person to hang out with, easy to get along with and one to have endless conversations with, without a single dull moment.

Scott it was f$&*in’ awesome meeting you, getting to know you as a person and of course to see you perform some classics live on stage! You’re still with us, you’re still in our hearts. THANK YOU!

All of us at Pitch Black Records send our deepest condolences to Scott’s family and friends. Scott, until we meet again…

Click here for the live radio interview conducted by Robert Camassa on Cyprus radio with Scott Columbus on July 16th, 2010, a week before the Power of the Night V Festival. 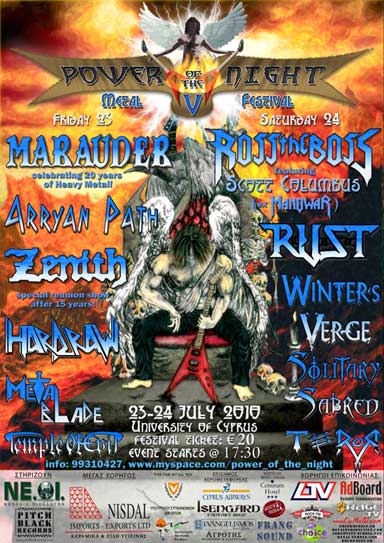