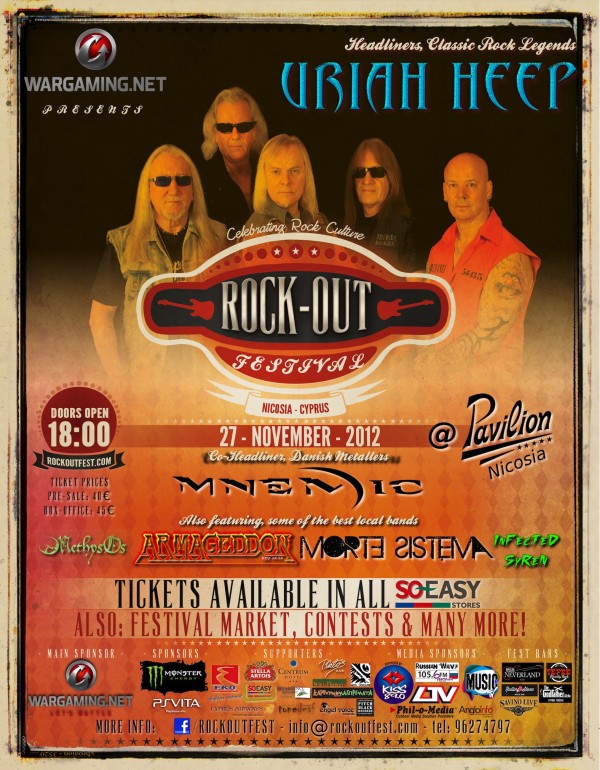 Pitch Black Records is proud to be supporting the upcoming Rock Out Festival with legendary URIAH HEEP as headliners!

Here’s some more info directly from the event organizers:

One of the most ambitious rock events in Cyprus ever presented to rock lovers all over the island. The festival will celebrate the culture of rock music in our lives and will feature performances from some of the most exciting international and local bands. The event will also include street performers, markets, exhibitions and a special signing session by the artists appearing.

URIAH HEEP, one of the biggest rock bands of all time, will honor the festival as its headliners promising a show that you will never forget. URIAH HEEP debuted in 1970 and have since sold in excess of 30 millions albums worldwide. They constantly tour the world, playing in over 53 countries and the band’s live setlist features hits from the 70s and 80s, such as “The Wizard”, “Free ‘n Easy”, “Sunrise” and their monster hits “Easy Livin'”, “July Morning” and “Lady in Black”, as well as new material.

Co-headlining the festival is Danish metal-heads, MNEMIC. The band have charted in the Top 100 in Denmark and were the first Danish metal band to open the Orange Stage at Roskilde Festival in 2004, one of Europe’s biggest mainstream festivals with 80,000 spectators. They have worked with Down and The Fugees producer Warren Riker, collaborated with Roy Z (Judas Priest and Bruce Dickinson producer) and have toured with bands such as Metallica, Deftones, Machine Head, Meshuggah, Arch Enemy, All That Remains & The Haunted.

Our goal is to establish ROCK OUT FESTIVAL as one of the biggest yearly rock events in the island and hopefully in all the Mediterranean. The success of this year’s event will help us bring more great international bands and expand the festival in order to bring you the best rock experience possible.

Pre-sale tickets are available in SoEasy Stores all over Cyprus and on-line through Pitch Black Records (www.pitchblackrecords.com) for 40 Euros each.

Tickets will also be available at the box office during the festival for 45 Euros each. Children under 12 get in free as long as they are accompanied by an adult.

Festival doors open 18:00 on the 27th of November at Pavilion Hall, Nicosia with many cool surprises by both artists and festival supporters. For more information visit our official website @ www.rockoutfest.com and our facebook page: facebook/rockoutfest or call our Fest-Hot-Line: 96274797.