Ross the Boss – Power of the Night Festival 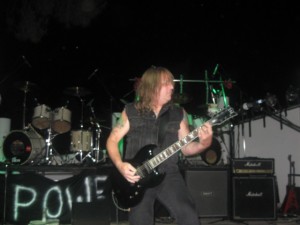 Special thanks also for the last-minute addition of an unrehearsed ‘Hail to England’ re-titled ‘Hail to Cyprus’ especially for that evening. A decision which as singer Patrick Fuchs commented was based primarily on the warm hospitality the band experienced during their time in Cyprus as well as the audience’s enthusiastic reaction (fan-filmed video available at http://www.youtube.com/watch?v=3DAyYHh1jYQ).

Ross the Boss delivered top quality metal and proved again both on stage as well as off stage that good solid heavy metal is also comprised of good character and courtesy and of course a tremendous respect for fans.  Ross the Boss is indeed a TRUE metal leader!

Pitch Black Records would like to wish Ross the Boss the best of luck with their new album scheduled for release in November on AFM Records. We are more than confident that it will simply destroy everything in its path!

Ross, Patrick, Carsten, Matze and Scott WE THANK YOU!