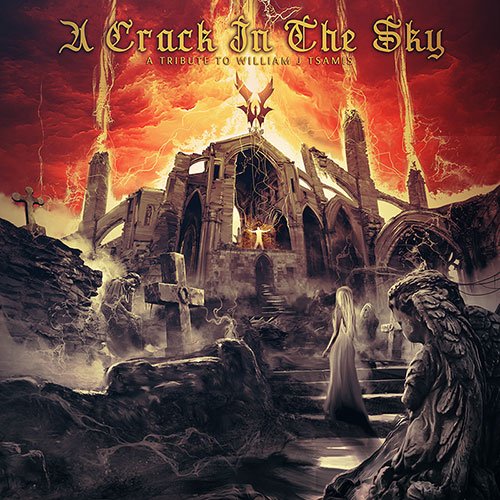 Pitch Black Records is deeply honored and proud to announce the release of the official tribute to the late William J Tsamis (March 13, 1961 – May 13, 2021). Titled “A Crack in the Sky – A Tribute to William J Tsamis” the album is scheduled for release on May 13 2022, the one-year anniversary of his passing.

A true hero of the Heavy Metal underground and beyond, the legacy of guitarist and composer William J Tsamis will forever be deeply intertwined with the name of WARLORD. Formed in liaison with drummer extraordinaire and perpetual bandmate Mark Zonder, WARLORD managed to rise to prominence amidst crushing competition right in the middle of the post-NWOBHM / US Heavy Metal explosion of the early 1980s. Among the main distinguishing factors that contributed to WARLORD’s elevated position in the pantheon of US Metal is the characteristic and classically-trained guitar- and song-writing prowess of William J Tsamis. Like no other musician of the times, he had the ability to marry earth-shattering heaviness with melodic sensibility in the creation of larger-than-life compositions that, when draped in language and imagery related to the eternal battle between good and evil, reached unparalleled intensity and grandeur.

In addition to his work with WARLORD, William J Tsamis also channeled his creativity into the lesser known, but equally potent and arguably more personal projects LORDIAN WINDS and LORDIAN GUARD. Of special notice are the two LORDIAN GUARD albums he released with his late wife Vidonne Sayre Riemenschneider on vocals, which despite material shortcomings come across as some of the most unique and brutally honest Heavy Metal records of the 1990s.

Although WARLORD never attained mass popularity on the magnitude of some other acts at the time, the continued impact of William J Tsamis’ works on Heavy Metal should not be underestimated. Like all great guitarist-composers, Tsamis developed his own mode of expression that is as instantly recognizable as it is difficult to pin down with words. Adhering to the European school of classically-influenced electric guitar playing, he managed to combine the primeval force of Heavy Metal with a deep-trawling sense of majestic melancholy.

Such a unique approach always wins out in the end, and the upcoming tribute album is a testament to the influential role William Tsamis’ music has played, and continues to play, on Heavy Metal musicians of all backgrounds and ages across the globe. 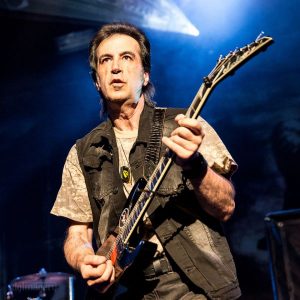 Approved and endorsed by WARLORD’s management, “A Crack in the Sky” features brand new recordings of timeless classics, all exceptionally covered by 16 outstanding bands, young and old, hailing from different parts of the world. Clocking in at just a few seconds over 79 minutes, this is as “full” an album as it could possibly get!

Special mention must be made to the album’s liner notes which include a foreword by Mark Zonder along with brief statements by each participating band. Furthermore, a few industry individuals and artists have been invited to share their thoughts about Bill Tsamis in a special “In Memoriam” section within the album’s liner notes. The liner notes of any album are of course an integral part of it, but in this case, they are of particular importance as they are a powerful portrayal of what Bill Tsamis has meant to people; both as a musician and as a person. For this reason, Pitch Black Records will be making a special digital edition booklet (14 pages) freely available for anyone to download on release date.

“A Crack in the Sky – A Tribute to William J Tsamis” will be released in the following formats:

CLICK HERE FOR PRE-ORDER DETAILS FOR ALL PHYSICAL FORMATS.

The album’s cover and artwork have been created by the talented Giannis Nakos of Remedy Art Design with photography kindly provided by Chris Del Grande. Mastering and additional mastering was handled by renowned producer Arthur Rizk.

March 13, 2022 in News
Join our Mailing List
MUSIC
Random video
Manage Cookie Consent
To provide the best experiences, we use technologies like cookies to store and/or access device information. Consenting to these technologies will allow us to process data such as browsing behavior or unique IDs on this site. Not consenting or withdrawing consent, may adversely affect certain features and functions.
Manage options Manage services Manage vendors Read more about these purposes
View preferences
{title} {title} {title}