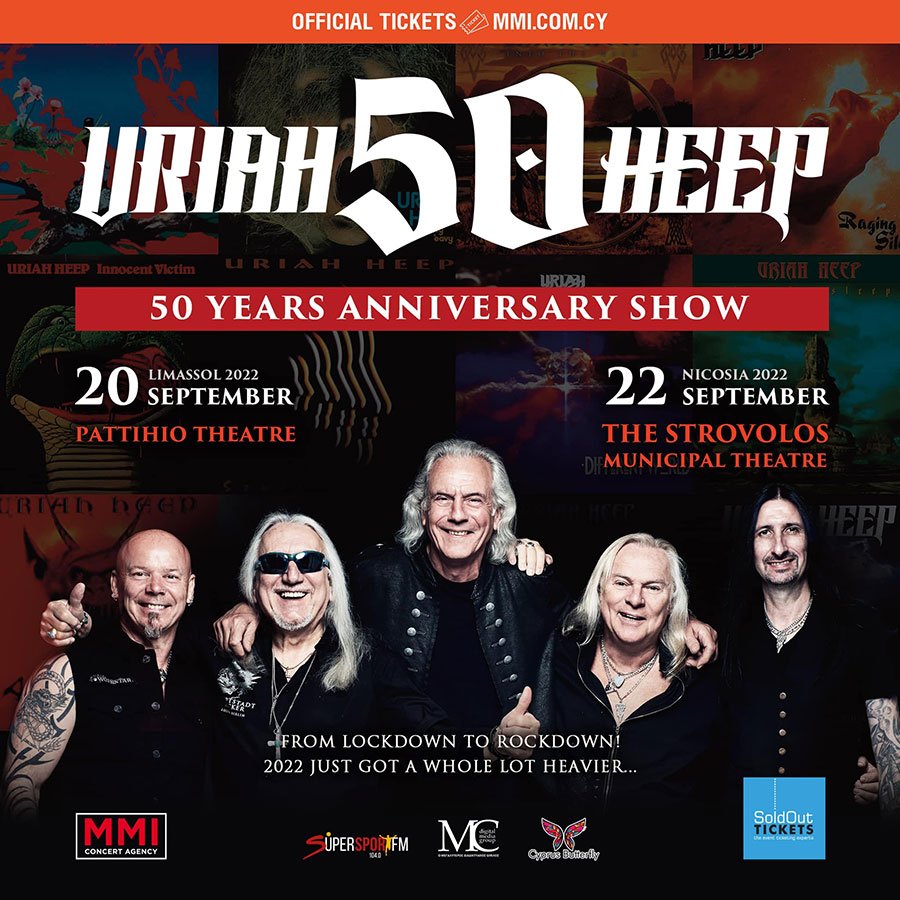 We are extremely thrilled & proud to be supporting this event organized by Millenium Music International in Cyprus!

The legends of Classic Hard Rock URIAH HEEP are coming to Cyprus to celebrate their 50th anniversary! A show not to be missed!

Take part in celebrating this outstanding anniversary of the legendary URIAH HEEP and witness the band play live your favorite songs in Limassol on September 20th and in Nicosia on September 22nd!

THE LEGENDS OF CLASSIC HARD ROCK URIAH HEEP ARE COMING TO CYPRUS TO CELEBRATE THE 50TH ANNIVERSARY OF THEIR MUSIC CAREER!

The creators of such iconic songs as Easy Living, July Morning, The Wizard, The Lady in Black will perform your favourite hits with large-scale concerts in Limassol on 20th of September 2022 and in Nicosia on 22nd of September 2022!

The URIAH HEEP 50th Anniversary show would be an evening with a magnificent performance!

A career retrospective spanning the band’s 50 years including clips from the iconic moments of the band’s history! Projection of all the birthday wishes from a plethora of rock glitterati! Pics of every ex-member of the band!

You will enjoy the Acoustic and Electric sets celebration of classic songs from the past 5 decades with a verbal introduction from the lead guitarist MICK BOX!

Along with the iconic Led Zeppelin, Black Sabbath and Deep Purple, URIAH HEEP played a significant role in the development of classic hard rock. The band’s debut album Very ‘Eavy, Very’ Umble heralded the emergence of a new movement that would reign in the 70s of the twentieth century and only strengthen its position in the 80s.

“Gypsy”, “Bird of Prey” and “Walking in Your Shadow”. These songs have started the great 50-year history of the URIAH HEEP, which lead them to the upcoming tour. During their astounding career, URIAH HEEP have released countless studio and live albums, sold over 45 million records worldwide, and played over 4,000 epic concerts in 60 countries. Such dedication to art, unchanging style and enthusiasm secured the band’s status as founders of hard rock and allowed their music to perpetuate in the hearts of loyal rock fans of the 70s.

The point of all this is that even now, 50 years after the band’s inception, the sun seems to be shining down upon Uriah Heep. If there’s another band born in 1969 that has stayed as engaged with their fans as Heep, all the power to them. But for leader of the band, Mick Box, music has never been a competition—him and the band will keep spreading their many messages of positivity all over the world and gaining new fans along the way. Their songs and music have stood the test of time, and with even more new songs on the horizon the mighty Heep are as strong and powerful as ever.

Take part in celebrating this outstanding anniversary of the legendary URIAH HEEP and witness the band play live your favourite songs in Limassol on 20th of September 2022 and in Nicosia on 22nd of September 2022!

Tickets on sale at MMI.COM.CY

September 11, 2022 in News
Join our Mailing List
MUSIC
Random video
Manage Cookie Consent
To provide the best experiences, we use technologies like cookies to store and/or access device information. Consenting to these technologies will allow us to process data such as browsing behavior or unique IDs on this site. Not consenting or withdrawing consent, may adversely affect certain features and functions.
Manage options Manage services Manage vendors Read more about these purposes
View preferences
{title} {title} {title}