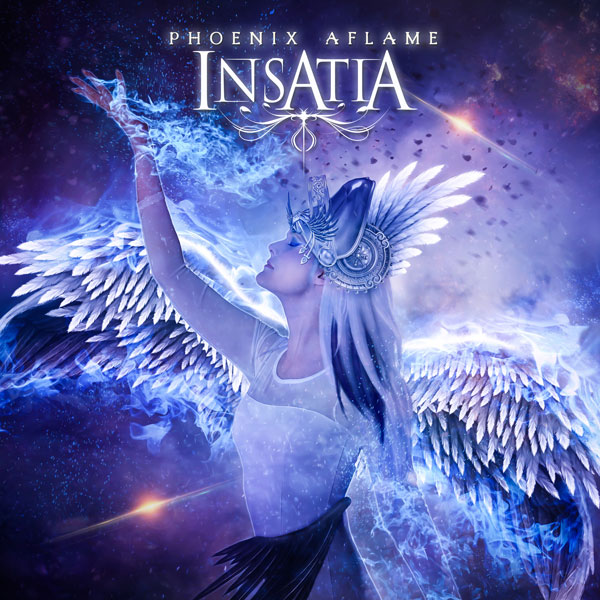 Pitch Black Records announces the addition of female-fronted US/Canadian symphonic power metal act INSATIA into its artist roster and the release of the band’s second album, “Phoenix Aflame”, out on June 23rd, 2017 on CD and Digital.

Formed in 2009 and fronted by charismatic vocalist Zoe Federoff, the band has released its self-produced debut album (“Asylum Denied”) in 2013 and has since then opened for multiple international acts, including Sonata Arctica and Dark Tranquility among others.

The band’s upcoming release, “Phoenix Aflame” is a melodic power metal album with masterfully blended folk and symphonic elements. To top it all off Federoff’s amazing vocal work adds a spectacular dimension to the album’s already superb atmosphere and aesthetic.

Producers Fabio D’Amore (Serenity) and Ivan Moni Bidin (Starsick System, Pathosray, Last Warning), joined by Staffan Karlsson (known for his work with Arch Enemy, Firewind, Roxette and many other notable acts) have surpassed all expectations in producing this album as the end result is simply outstanding!

The album’s title track is now available for streaming and free download while the album is already up for pre-order at https://pitchblackrecords.bandcamp.com & http://store.pitchblackrecords.com.

Tracklisting:
1 Land of the Living (Intro)
2 Act of Mercy
3 Memory of a Sapphire
4 Sacred
5 We are the Grey
6 Phoenix Aflame
7 Not My God
8 Captor and Captive
9 Velvet Road
10 Healer of Hatred

May 19, 2017 in News
Join our Mailing List
MUSIC
Random video
Manage Cookie Consent
To provide the best experiences, we use technologies like cookies to store and/or access device information. Consenting to these technologies will allow us to process data such as browsing behavior or unique IDs on this site. Not consenting or withdrawing consent, may adversely affect certain features and functions.
Manage options Manage services Manage vendors Read more about these purposes
View preferences
{title} {title} {title}